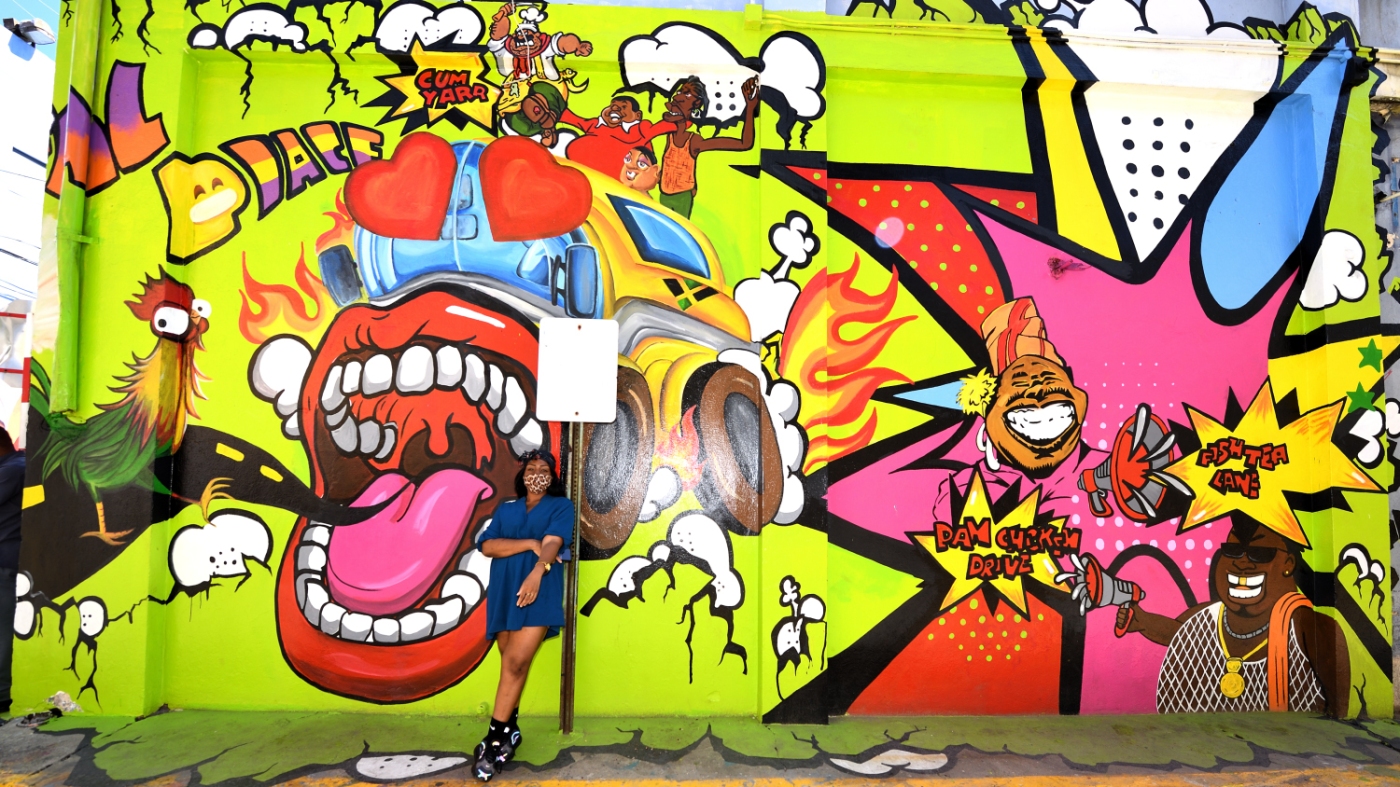 This article was originally published in the Jamaica Monitor on 4 and 11, 2021 and is now posted as it was submitted, with images added. All photos are by Stuart Reeves, courtesy of Doris Gross, Kingston Creative.

These days, hardly a week goes by, these days, without a PR announcement about a new mural project in Downtown Kingston. It is hard to keep track of the numbers but in recent times, more than sixty new murals have gone up, piloted by organizations such as Kingston Creative and the Kingston Municipal Corporation. The mural campaign, which has been branded as Paint the City, is framed as part of efforts towards general urban renewal and the establishment of a Downtown Art District. Many are sponsored by corporations and other organizations that operate in Downtown Kingston and some have been commissioned for the walls of their headquarters. There is a specific initiative to “muralize” Water Lane, part of which has already been pedestrianized, and to create a walkable connection between the Institute of Jamaica on East Street and the National Gallery of Jamaica on Orange Street. The Duke Street Museum project is another initiative in the area and involves mural and other public art commissions.

The mural campaign is, as such, a laudable initiative, that brings beauty and cultural interest to the areas in question. The establishment of a focused Downtown Kingston Art District should greatly benefit the Jamaican cultural sector – with “art district” conventionally meaning a recognized area with a high concentration of cultural activity and enterprise, such as museums and other cultural institutions, commercial and non-profit galleries and performing arts spaces, studios and rehearsal spaces, craft markets and design stores, public art, historical sites, and a variety of cultural events. Critical questions however arise that need more than a glib PR response if these initiatives are to be as socially and culturally beneficial as they should be.

One key question is what intervention these projects really make into the social and cultural environment of Downtown Kingston, beyond the obvious beautification. Downtown Kingston is often described as primarily a business district, but it is also a residential area, where some 80,000 people live, most of them in the lower income category, and where people of all socio-economic backgrounds work in formal and informal jobs. It is complex, contested terrain with a history of social tension and conflict – socially, politically, and in terms of how the communities within position themselves towards each other, with criminal gang activity as a factor to be reckoned with. It is also a part of Jamaica whereby highly developed and cared for modern and historical infrastructure coexists with deep neglect and facilities which are barely suitable for human habitation.

A recent Gleaner article, with a photo of a broadly smiling female vendor in front of a mural, assured us that the residents do appreciate the murals, which I am sure most do. But the article inadvertently also drove home that the mural campaign does not emanate from within the community but is largely the work of “uptown” organizers and couched in notions of benevolent patronage.

The mural campaign has already been criticized for amounting to a colourful “band-aid” applied to Downtown’s urban blight, without being supported by substantive action regarding the underlying and pressing social and infrastructural issues. At the time of writing, a state of emergency is being considered for Central Kingston, because of the worrisome recent increase in crime and violence in the area. A mural campaign or an art district will do nothing to stop such developments, unless it is couched in thoughtful, comprehensive community action.

Art Districts have a bad rep in the critiques of urban development and their appearance is often linked with gentrification – a problematic social effect of urban renewal, which may or may not be deliberate, whereby property prices go up and social dynamics change in a way that marginalizes and displaces the original residents. There is a saying that “the artists come first, and the developers follow.” In many parts of the world, artists have recognized this problem and taken position against unchecked gentrification, becoming community advocates and activists who use their public visual voices and other creative interventions to agitate for inclusive social change. While the current mural campaigners in Downtown Kingston insist that they consult with the communities and use community artists in some of the projects, there is only limited evidence of any such commitment and, if the PR is anything to go by, many of the murals seem to serve corporate rather than community interests. Claiming to be committed to “balanced, inclusive development,” to use the euphemism of the day, amounts to mere lip service and, as such, achieves nothing at the social level.

Next week we will look at some of the new mural projects and their significance, in comparison to more traditional street art in Downtown Kingston.

Last week, I shared my general concerns about the “Paint the City” mural campaign, and the emerging art district in Downtown Kingston. Before we take a closer look at what the new murals may signify, we do need to recognize that the city has long been painted: Downtown Kingston has been the site of popular street art since at least the early Independence years and probably much earlier. This rich legacy of street art involves imagery associated with Garveyism, Rastafari and, to a lesser extent, Revival; with reggae music and dance hall; shop decorations and advertisements; expressions of partisan political affiliations, community leadership and gang activities; community memorials; protest and other graffiti; and the idiosyncratic expressions of socially marginalized persons.

There was an outcry, about ten years ago, when the Police started overpainting street murals that were allegedly associated with gang activities, in keeping with the prohibition on gang symbols under the anti-gang legislation. Critics countered that many of these murals were community memorials for persons who had passed away, often violently, and were not necessarily associated with gang activities. Important and entirely legitimate questions about the social erasure, the right to mourn, and freedom of expression arose. One of my students however shared in class that he had grown up in a garrison community and was happy to see the monumentalized images of feared community power figures removed, as he had found their presence oppressive. In addition to reminding us of the complexity of Downtown communities, his comment also drove home that images have power, directly and subliminally, and can make potent, positive or negative propagandist interventions.

Street art is one of the main arenas in which a recognizably Jamaican visual culture was forged and the influence of this vocabulary is certainly evident in the new “Paint the City” murals. Some of the established downtown muralists have been involved in the production of such murals, although most are by artists from outside of the community. There is a cultural and aesthetic disconnect in many of the new murals, an artificial “rootsiness” and almost mannerist conception of what Downtown Kingston street art is supposed to look like. This sense of disconnect also has to do with the cheerful “feel good” content of the murals, which is typically focused on celebrating Jamaican culture, history, and the natural environment but does not delve very deeply or provocatively into those subjects. This again raises the question about how “rooted” the mural campaign really is in the Downtown community.

We need to ask what it is the murals are saying, who they speak for and to, and what they seek to achieve, beyond “sprucing up the place” and creating tourist attractions. There is an overly scripted quality to many of them and while the intent is obviously to make an uplifting intervention, most appear to do so in a non-committal, superficial manner that is unlikely to make much of an impact beyond visual beautification. There are exceptions, where more idiosyncratic and authentic artistic and cultural voices have come into play, such as the humorously irreverent references to Jamaican culture in the illustrated mural, titled Jamaica Is Not a Real Place by Shanique Stewart, but generally the murals have a safe, generic quality to them. I would like to see more aesthetic diversity, more invention, exploration, and play, more interactivity and, most of all, more open, courageous, and meaningful engagement with the cultural, social, and political issues that affect Downtown. But that requires for the murals to be more actively informed, and indeed directed by community concerns, and for those who commission, design and make them to be prepared to work and stand with the communities in making statements that may not be so innocuous and risk free. The time has come to have a frank and inclusive discussion on these questions, since street art can achieve a lot more, socially and culturally, than what the current mural campaign suggests.