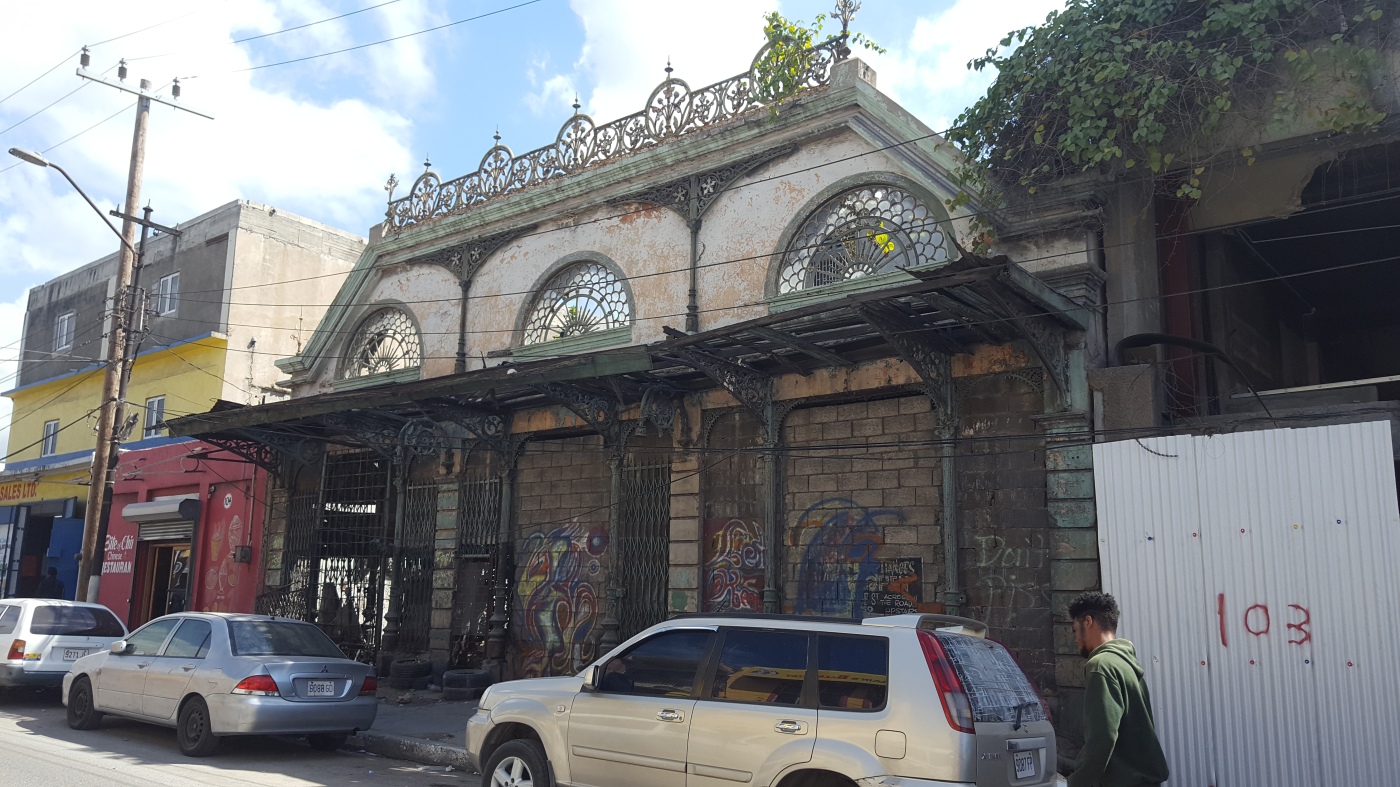 This post was first published as a two-part article in the Jamaica Monitor, on May 2 and May 9, respectively. It is published here as it was in the Monitor, but with more images added.

A few weeks ago, the Burnett Webster house on Seaview Avenue was demolished to make way for a new commercial complex, developed by First Rock Capital Holdings. A photograph of the demolition generated much outrage on social media. Many felt that the building should have been preserved, given its historical and architectural value, and its potential as a museum and community space like Devon House – the sort of cultural and recreational, green space of which Kingston needs many more.

The house had been built in the 1920s by Burnett Webster, Jamaica’s foremost Art Deco designer and a pioneering figure in modern furniture and interior design in Jamaica. Art Deco, which is characterized by clean, elegant, geometrically controlled lines, was the first major modernist design style and it was popular throughout the Caribbean. One major example, Kingston’s Carib Theatre, has thankfully been preserved and continues to function as a cinema. It was constructed in 1938 and designed by the American architect and artist John Pike.

Burnett Webster’s elegant and innovative furniture designs, for which the sculptural work was often executed by Alvin Marriott (who later became a well-known Jamaican sculptor), were the subject of a major exhibition at the National Gallery of Jamaica in 1999. Built in the then fashionable “hacienda style”, Webster’s house had exquisite custom woodwork, designed by Webster, and the stairwell, with its sinuous wooden staircase, was a work of art in itself.

The property was bought by the art collector Wallace Campbell after Webster died. Campbell housed his collection and ran the Seaview Fine Art gallery there. Campbell’s collection comprised major examples of Jamaican, Cuban and Haitian art, including some of the best paintings and sculptures by Jamaica’s John Dunkley. There were plans for a museum. Towards the end of his life Campbell however decided to sell the house and the collection. The house is gone now and much of the collection has left the island, some of it attracting auction prices at Christie’s that are well above the estimates. Both are irretrievable losses to Jamaica’s cultural heritage.

When it comes to architectural preservation, Jamaica should take a leaf from its neighbour Haiti. The famous Gingerbread Neighbourhood in Port-au-Prince was in 2009 listed on the World Monuments Watch list because of its unique historical and architectural value. While many of the gingerbread mansions were damaged in the 2010 earthquake, several have since been restored, such as the Maison Dufort, which now serves as an art gallery and cultural space. The difference is that heritage preservation is not seen as an inconvenient obstacle to development but as an asset to the community and the city, and part of what gives it its defining character.

When the Webster house was demolished, the question arose who was responsible for its preservation and who would have had to bear the costs, as these are two different things. The Jamaica National Heritage Trust, which is mandated to protect Jamaica’s heritage, could have intervened and it would be interesting to know why it did not. Is it that there is a hesitation to impose the resulting financial burdens on private owners, let alone major developers, or that 20th century architecture is not yet recognized as “heritage”?

For the current urban development boom in Kingston to be sustainable and livable, it must be soundly anchored in Jamaica’s way of life, social and physical environment, and history, with a commitment to an improved quality of life for all. Devon House was once slated for demolition and it became the popular recreational and cultural space it is today because someone – Edward Seaga – recognized its importance and potential. Even if the Webster property had to be put to commercial use to be viable, there is no reason why the house could not have been integrated into the new complex. The Exchange Museum in Bridgetown, Barbados, comes to mind as an inspired integration of historical and contemporary architecture that combines an 18th century Masonic Lodge building with a stunning glass and steel extension. Historic Bridgetown and its Garrison have been declared a World Heritage Site, while we are still waiting for the declaration of historic Spanish Town.

What is sorely lacking in Jamaica is an urban development vision, informed by a healthy dose of imagination, about how the old and the new can coexist productively and innovatively, in ways that turn the current real estate development boom into sustainable and inclusively beneficial progress.

Kingston has the potential to be a beautiful city. Its geographic setting on the Liguanea Plains, between a large natural harbour, the iconic Long Mountain, the Blue Mountain foothills, the Red Hills massif, and the plains of St Catherine, is stunning and majestic. One of the most undervalued parts of the city’s potential is, however, its architectural heritage, which is in jeopardy, because of neglect and ill-conceived development. It would be unfortunate if a city with so much history and distinctiveness would become a generic amalgamation of soulless apartment buildings and malls, and the already ubiquitous second-hand car lots.

A friend, Paul Hamilton, recently alerted me that a historic cast-iron building on the upper section of Orange Street, built around 1900 and once a cigar store and factory, is to be demolished to make way for a parking facility. Cast iron buildings are among the most iconic in the Caribbean and are, because of their openness and resilience against natural disasters, well-adapted to the local environment. The Marché en Fer in Port-au-Prince, the Stabroek Market in Georgetown, Guyana, and the Schoelcher library in Fort-de-France, Martinique, are great examples. The Orange Street building may not look like much now but it could be restored to its former glory or, for that matter, relocated, as such structures are designed to be movable. Its destruction would be an unnecessary loss.

What I am calling for is development that is informed by inspired, and responsible dialogues with the historical, social, and natural environment. Many other cities, throughout the world, have done so successfully. Jamaica did some of it in the past: the recycling of old harbour warehouses for the Kingston Conference Centre was part of a serious effort to rethink the relationship between architectural preservation and development in the early 1980s. Reviving these ideas would be a win-win situation for all involved, including the developers.

Part of the problem is that the concept of architectural heritage is too narrow in Jamaica. Many think that it is limited to colonial buildings, Georgian or Victorian, and only to the “big architecture” of mansions and public buildings. Yet there is so much more that needs attention and is rapidly disappearing. In Kingston, this includes the vernacular architecture of the working-class neighbourhoods and urban lanes, and the old brick walls that are being dismantled and sold to make barbecues uptown.

Unlike other major Caribbean cities, such as Havana, San Juan and Santo Domingo (and our own, woefully neglected Spanish Town), Kingston does not have a “colonial district.” Part of the city’s distinctiveness, ironically, results from the devastating 1907 earthquake, as modern architecture arrived in Jamaica as part of its reconstruction. It is time to recognize this early modern architecture as an important part of Jamaica’s architectural heritage, as it represented a livable, attractive vision for Jamaican modernity. There are many Art Deco buildings between Halfway Tree road and the Kingston Waterfront, but few are recognized as being of value and several are in poor or significantly altered condition. With a judicious restoration campaign, Kingston could have a handsome Art Deco District that rivals Miami Beach.

There are early modern buildings in other styles that deserve similar recognition: the courthouse complex and the old Scotiabank building on King Street, for instance, were among the first to be erected after the earthquake and illustrate how the core of the old city was being reinvented. The Wray and Nephew building on Port Royal Street has already lost much of its beautiful wrought ironwork but it could still be restored – I understand that there are plans for it to become a museum. Another important and sorely neglected structure is the downtown Kingston railway terminal, which is literally falling apart, despite its obvious potential.

The task of preserving Jamaica’s architectural heritage may seem intimidating, because of the multitude of issues and perceived costs. With the right kind of vision, sound oversight, appropriate incentives, and public-private sector collaboration, however, it could be mobilized not just for the sake of preserving history but for making Kingston the livable, sustainable, and distinctive city it ought to be.

3 thoughts on “Before It’s All Gone: Preserving Jamaica’s Architectural Heritage”